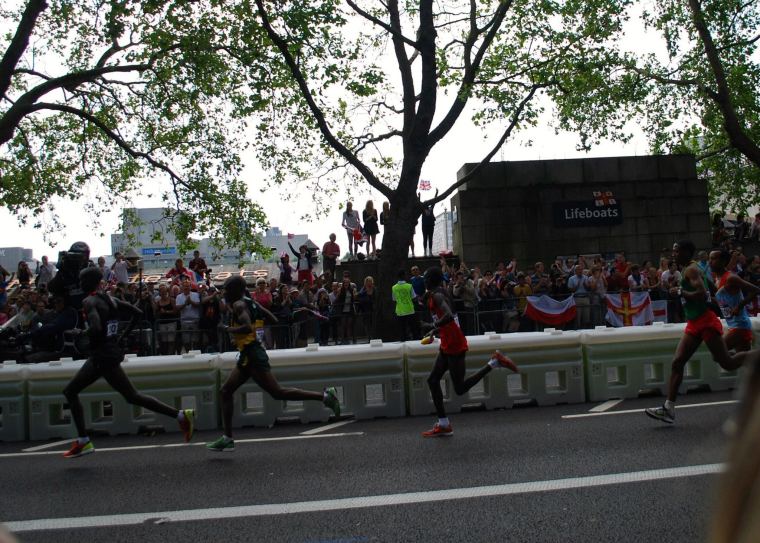 Well we finally saw an Olympic Sporting event live. On Sunday, the last day of the Olympics, we were able to go watch the Men’s Marathon along part of the unticketed route (for those wondering, only the area around the start/finish was ticketed). We weren’t sure we would go to it or not, in fact we had all but decided against it for various reasons. But Sunday morning we got up, with every intention of going to Church mind you, and my wife and I looked at each other and both said “I really want to do this.”

So we packed up things for the kids and headed out to go watch the Marathon. Since we had been talking about going earlier in the week, I already had looked up where the route would be and where it would be both easiest to get to and we would get the most action. So we went to Waterloo and walked across the bridge there (which I think has one of the best views in London) and took the stairs down to the Victoria Embankment. We arrived early enough that we got a reasonable spot, nearly an hour before the race started and about an hour and fifteen minutes before the runners would first go by the area. And we set up waited.

Now, when I started to write this post, I thought about saying something about running the race, or striving toward the goal. I thought about things like how life is a marathon and we need to finish well. While all of those are true, and certainly have their place, they weren’t my experience that day. I wasn’t in the marathon. I was a spectator and my experience was significantly different. Most of the time this was our view:

The empty racecourse, waiting for its runners

There was nothing going on. We were waiting. As I reflected on the day, though, I didn’t think it was boring, even though we waited for over an hour before the first runners came through, something about it felt exciting. There was an anticipation as any moment the runners could come around the corner.

We did other things. We talked, we played with our kids, read them books. We looked around and took pictures of the empty street, and the London backdrop that we would be leaving before the end of the year. It was enjoyable and we liked the other things we did. We met knew people (whom we would likely never see again) and made a good day out of it. Still, we had a purpose to be there. We were there to see this:

And it was certainly exciting. Now, I want to be clear on something. If God has given you a specific purpose to do something right now, you shouldn’t wait around to do it, but go out and immediately take care of it. Still, as I reflected on our waiting in anticipation, I thought about our day to day lives as Christians. We don’t go on a mission trip every day. Even though we talk to other people about Christ, we aren’t only evangelists. There are other things to do every day. We go to work. We pay bills. We drive around and go grocery shopping. Sometimes we just take time with family. There are periods in our life where we are waiting. Waiting for the next big thing.

Too often, though, we wait without anticipation. The lack of anticipation, or purpose to our waiting, changes it from something exciting and enjoyable to drudgery. Waiting on a bus is different from waiting for an exciting, rarely seen event. God is going to do something, and instead of drudgery in the mean time, there should be an anticipation for it. It changes the intervening activities. While we waited for the marathon, our conversation was about how exciting it would be, about other things in the Olympics. We talked about how wonderful it would be for our kids in the future. We got them excited. There was a purpose to our waiting. In any other context it would have been dull and mundane. On that day, in that location, though, it was purposed. So while your waiting on the next thing to happen, get some anticipation for it, even if it’s not entirely clear what that is. And add some purpose to your waiting. A trip to the grocery store is mundane, but the same trip taken with the knowledge that the King of the Universe could be coming any minute, and, well, that’s a lot more exciting.

← A Great Cloud of Witnesses at a Stadium
Difficult Passages: The Levite’s Concubine →