So a friend gave us their tickets to the Olympic Park here in London for about a week and a half ago (they had unexpectedly acquired tickets to an event, which automatically gives access to the park). I took the day off and we had a good time.

The Entry Gate to the Park

There were many interesting things to see. When we first arrived we were greeted by a rather imposing gate which marked one of the few entry

points to this park that was walled off within the city of London.

There were of course the largest McDonalds in the world (and the one where we ate, but still had to wait for an hour to get our happy meal:) ). The tallest Art Structure in Britain, called the “Orbit” which promised panoramic views of the city.

Or the many, many odd depictions of the rather odd Olympic mascots (in keeping with tradition). 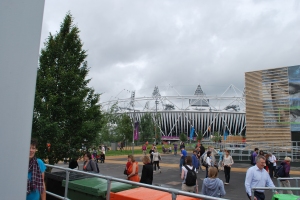 Now, we weren’t able to go inside because they were rehearsing for what I assume will be the closing ceremony, and the athletics events didn’t start until Friday. But as I looked at the stadium and then at the massive crowds of people around, I couldn’t help but be reminded of the words from Hebrews.

Therefore, since we are surrounded by such a great cloud of witnesses, let us throw off everything that hinders and the sin that so easily entangles. And let us run with perseverance the race marked out for us, 2 fixing our eyes on Jesus, the pioneer and perfecter of faith. For the joy set before him he endured the cross, scorning its shame, and sat down at the right hand of the throne of God. 3 Consider him who endured such opposition from sinners, so that you will not grow weary and lose heart. — Hebrews 12:1-3 (NIV)

The cloud of witnesses Paul is referring to is, of course, different from spectators who pay to come watch other athletes. Rather than those who could not do what the other runners (and other athletes) do, these are those who have already competed. Rather than competitors, though, these other runners are cheering the us to go further, faster, and better than they did. To perform the race in a more admirable fashion.

If you look at runners in the stadium, you can notice many things in common about their technique. I’d just like to focus on one. Their heads. For the majority, if not the entirety, of every race, the runners look straight ahead. They don’t look behind them or to the side, and they certainly don’t look at the crowds. If they do, they almost always begin to lose ground compared to the other runners. Instead they focus on what is ahead. For the Christian, what is ahead of us, the goal that have in mind, is Christ. To look elsewhere is to lose ground, to become hindered. We don’t focus on the accolades, instead our goal is on the cross. Not praise, as the Olympic athletes receive, but humiliation, so that God might be glorified.

← A Good Response to Massive Loss
Waiting with Purpose →

3 comments for “A Great Cloud of Witnesses at a Stadium”